On the Dnieper metallurgical plant completed the repairs of CCM-1

Earlier it was reported that DMK started stopped for the overhaul of blast furnace and intends to significantly increase production of steel. 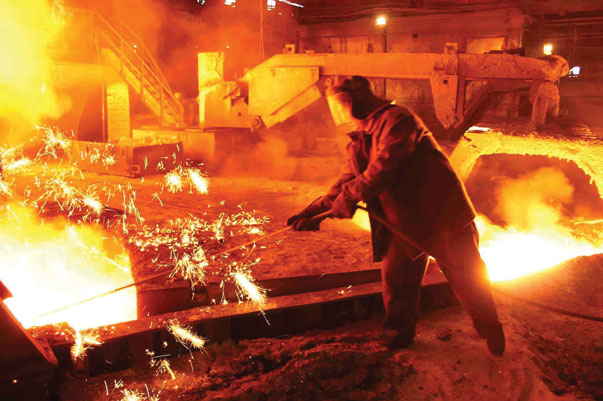 Dneprovskiy metallurgical plant has completed a series of routine maintenance in the period of technological downtime in the BOF shop. After the repairs commissioned the Converter No. 1, began casting machines continuous casting No. 2 and No. 3. After a 10-day renovation began work CCM-1.

"the Main goal of current repairs - replacement of steel in the hopper of zones of secondary cooling, where the production process is the final solidification of the ingot. Also solved the problem of water leakage in the main pipeline of the machine. As a result, we had insufficient cooling areas on the surface of the workpiece that affect the quality of the product", - said Mikhail Anosov, Deputy chief of Converter shop of engineering.

During the repair was replaced pumps feed lubricant dispenser in a mold, in order to avoid the periodic crashes of the system. Replaced by the frame of the swing mechanism and made an audit of crystallization, conducted work process control system for setting the linear velocity of rotation of the rollers on the blocks pulling-correct mechanisms.

repairs were carried out teams of Contracting organizations OOO "Metinvest-Promservis" and LLC "Industrial Ukraine". Investment in renovation amounted to about 3 million.

7-stream varietal CCM-1 was commissioned in 2008, the machine is designed for production of continuous cast billets of square cross-sections from 130 to 200 mm. the machine capacity of 1.4 million tons per year.

Recall that at the end of last month, DMK zapustili stopped summer blast furnace and the rolling mill plant is provided wholly download of the "Mill 400/200" (produced wire rod and rebar). In addition, a ball-rolling mill.

At the end of October working DMK recorded videopamela to President Zelensky demanding the nationalization of the company.

In may 2017 DMK came under the control of the group "Metinvest". Although formally the company and in control of the Corporation "industrial Union of Donbass" Sergey Taruta, the implementation of most of the products is carried out through the structures of Rinat Akhmetov.

In may 2019 owner of the Corporation Industrial Union of Donbass (ISD) Sergey Taruta at a meeting with collective of the plant said that the bankruptcy of the Dnieper metallurgical plant is inevitable because of the aggressive creditors.

Public joint stock company "Dniprovskiy metallurgical plant" - one of the largest enterprises of mining and metallurgical complex of Ukraine, specializiruetsya on the production of iron, steel, rolled. The company was founded in 1889. The plant employs more than 9,000 people.

Recommended:
Biden proposed $ 1.9 trillion stimulus plan
Ukrzaliznytsia held successful auctions for the sale of scrap metal with an increase in the sale price of almost 50%
Energy efficiency in machine-building enterprises: a list of typical effective measures has been prepared
On this topic
PJSC "DMK" has successfully implemented the pilot project "Academy of staleplavilnymi"
On the Dnieper metallurgical plant blew in the second blast furnace
"ArcelorMittal Krivoy Rog" has created a mobile monitoring system and equipment diagnostics
ArcelorMittal Kryvyi Rih reconstructed half of the sintering machines of the second sinter plant
The workers of PJSC "DMK " appealed to Zelensky with a request to nationalize the enterprise (Video)
ArcelorMittal Kryvyi Rih denies SBU statements on exceeding the maximum radiation level
Add a comment
Сomments (0)
News Analytics
Novokramatorsk Machine-Building Plant acquired a unique machining center25-01-2021, 17:27
KAMAZ intends to double the production of electric buses25-01-2021, 15:47
Liberty Steel will submit a firm bid today for ThyssenKrupp Steel Europe25-01-2021, 14:23
A new steel-pouring stand was launched at the Dneprovsk Iron and Steel Works25-01-2021, 13:53
10 miners recovered from exploded gold mine in China25-01-2021, 13:46
China will overtake the United States to become the world's largest economy in27-12-2020, 12:04
The shortage in the US steel market will last at least until the end of the25-12-2020, 11:36
Steel production in China to surpass one billion tons this year23-12-2020, 10:59
Iron ore prices hit seven-year high and continue to rise15-12-2020, 10:26
Prices for metallurgical raw materials continue to rise in regional markets10-12-2020, 11:32
Sign in with: