Trade union organizations claim repressions after three of their colleagues received real prison sentences in Belarus for attempting to organize a strike. 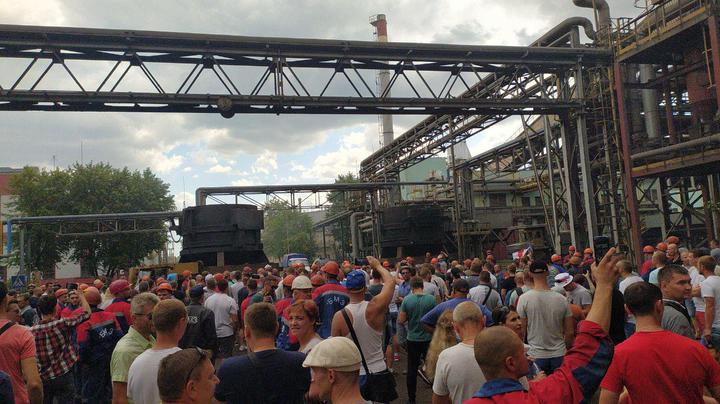 Trade Union of Metallurgists and Miners of Ukraine with a link to the site of the International Trade Union Confederation (ITUC) reported that anti-union repression is intensifying in Belarus: three workers from the city of Zhlobin were sentenced to imprisonment for 2.5 and 3 years.

In particular, it is indicated that Igor Povarovo, Alexander Bobrov and Yevgeny Govor were imprisoned for trying to organize a strike at the Belarusian Metallurgical Plant on August 17, 2020.

"The management of the Belarusian Metallurgical Plant is again trying to suppress the independent trade union, a witch hunt is underway against workers who are trying to organize trade unions at other enterprises throughout the country," the report says.

“We condemn the increased pressure on the right to strike in Belarus. The government does not respect the right of workers to stop working, which is enshrined in international law. The international community must be determined to support workers and the entire population of the country, ”said Sharan Barrow, ITUC General Secretary.

The union noted that while the sentences handed down to the workers of the metallurgical plant are clearly aimed at suppressing the right to strike, several more people have been arrested for participating in public actions.

Recall that on August 17, 2020, several BMZ workers blocked the movement of special vehicles that delivered raw materials to hot shops, which led to a temporary stoppage of the furnaces. The state prosecution stated that in this way the enterprise suffered damage in the amount of 1,088 rubles. 50 kopecks

The suspects in the trial paid off the damage, but this did not save them from the actual deadlines. Three factory workers were tried last week: Igor Povarov was sentenced to three years in prison, Alexander Bobrov and Yevgeny Govor - to two and a half years in prison. Another "striker" Pavel Magidov had to flee the country to the Russian Federation.

Recommended:
Localization of production of electric cars and charging stations started in Ukraine
Uranium mining company of Ukraine will develop a program to ensure competitiveness
Tesla will launch production of electric vehicles in India
On this topic
Trade unions threaten the Ukrainian authorities with an all-Ukrainian strike of miners
Steel production in September 2020
Global steel production in June 2020 decreased by 7%
Yuzhmash told whether it is possible to launch reusable rockets from the Black Sea
Metallurgists of Ukraine require the government to withdraw the draft law "On labour"
Confederation of free trade unions of Ukraine supported the protests in Chile
Add a comment
Сomments (0)
News Analytics
Ministry of Commerce: China intends to strengthen trade and economic ties with24-02-2021, 18:49
Vostochny GOK in 2020 increased the production of uranium concentrate by 7%24-02-2021, 18:58
For the first time in Ukraine, recirculators and irradiators for air24-02-2021, 18:37
Novokramatorsk Machine-Building Plant keeps sales and production at the level24-02-2021, 17:53
The English court rejected the claims of the Russian "Tatneft" against24-02-2021, 17:42
Global iron ore production growth to outstrip cumulative production in India23-02-2021, 10:22
Fitch Ratings Warns of “Shocking Impact” on Fossil Fuel Exporters18-02-2021, 14:44
Raw material prices rise by about 10.5% in January 2021 - Deutsche Industriebank12-02-2021, 10:48
JP Morgan Analysts Announce New Super Growth Cycle in Commodities11-02-2021, 17:56
S&P Global Platts predicts first drop in domestic steel demand in China in 510-02-2021, 12:26
Sign in with: