ArcelorMittal Corporation is investing a billion dollars in environmental modernization and development of production in Krivoy Rog. 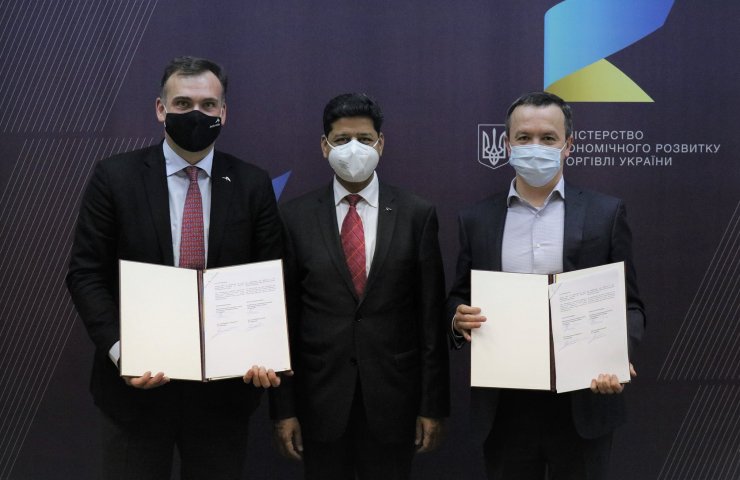 Today Minister of Economic Development, Trade and Agriculture of Ukraine Igor Petrashko and General Director of ArcelorMittal Kryvyi Rih Mauro Longobardo signed a Memorandum for the implementation of new investment projects. The company plans to invest about US $ 1 billion in new projects for environmental modernization and production development. About this Chairman of the Board of ArcelorMittal Lakshmi Mittal and President of Ukraine Volodymyr Zelensky agreed during a meeting in Kiev today.

ArcelorMittal Kryvyi Rih's new investment program “Steel Billion” will focus on reducing the environmental impact of production, sustainable development of the enterprise and introducing the principles of a circular economy: economical and reuse of resources and recycling of production waste.

“Together with the President and the Parliament, we have launched effective instruments that increase the investment attractiveness of Ukraine. Today's Memorandum is one of the first successful examples when a large international company plans to use appropriate instruments and increase investments and the number of jobs in Ukraine, ”- said after the signing of the Memorandum, Prime Minister of Ukraine Denis Shmyhal. He also thanked the company's management for socially important initiatives, the development of medicine and the support of local communities in the region where the production is located.

“ArcelorMittal is a major investor in our economy, exporter and employer. Today we have reached an agreement that the company will significantly increase the volume of investments in Ukraine, as well as introduce modern and environmentally friendly production technologies in metallurgy, which is one of the strategic sectors of the economy. We expect a gradual recovery in investment activity in the country after the crisis of 2020, and cooperation with the world's largest steel producer will serve as a powerful signal to investors that the time has come to invest in Ukraine, "commented Igor Petrashko, Minister of Economic Development, Trade and Agriculture of Ukraine.

At the same time, the General Director of ArcelorMittal Kryvyi Rih Mauro Longobardo noted that the company has invested over $ 5 billion in the development of production over 15 years of work in Ukraine, and now offers a new program "Steel Billion", according to which about $ 1 billion The United States will invest in green modernization.

“We continue to implement large investment projects and are gradually moving towards the transformation of ArcelorMittal Kryvyi Rih into a modern European production. Steel Billion is our new program for Ukraine that will finance the introduction of green metallurgy technologies and projects to reduce carbon footprint. This is fully in line with the ArcelorMittal Group's strategy of achieving carbon neutrality. Note that steel already has a lower carbon footprint than other materials: no other material has the same potential for recovery and reuse. The initiatives that we confirm with the Memorandum today are a progressive step in the Ukrainian industry. We count on the assistance and all-round support of the state on this path, ”commented Mauro Longobardo.

ArcelorMittal is the largest foreign investor and leader in the metallurgical industry in Ukraine. Annually ArcelorMittal Kryvyi Rih produces about 6 million tons of steel, more than 80% of its products are exported. The company employs over 29,000 Ukrainians.

Финансовая аналитика, прогнозы цен на сталь, железную руду, уголь и другие сырьевые товары. More news and analytics on Metallurgprom telegram channel - subscribe to get up-to-date market information and price forecasts faster than others.
Сomments
Add a comment
Сomments (0)
On this topic
The head of "ArcelorMittal Kryvyi Rih" joined the Board of the European Business
At ArcelorMittal Kryvyi Rih with the new year will be the new CEO
ArcelorMittal Kryvyi Rih management and trade unions agreed to come to an agreement
Volodymyr Zelenskyy met with Lakshmi Mittal, Chairman of the Board of Directors of ArcelorMittal
The head of the State Geological Survey of Ukraine offered ArcelorMittal Kryvyi Rih deposits of
ArcelorMittal Kryvyi Rih signed a Memorandum of Cooperation with Kryvyi Rih National University
Recommended:
Volvo invests $1.25 billion to build electric vehicle plant in Slovakia
Price volatility hits global steel market
The German government may confiscate the German part of Nord Stream 2
News Analytics
The Belarusian steel plant was visited by the Ambassador of Kazakhstan to06-07-2022, 17:44
US steel prices fall to December 2020 levels06-07-2022, 13:40
Interpipe mastered a new type of railway wheels for the EU market06-07-2022, 12:15
Tesla in the second quarter reduced the supply of cars by 18%04-07-2022, 10:24
Steel prices fall due to weakening European demand and problems in China04-07-2022, 10:40
High iron ore shortage could halt metallurgy's green transition28-06-2022, 14:02
Price volatility hits global steel market27-06-2022, 19:28
Recovery in China could be key to rising global steel prices - MEPS24-06-2022, 14:00
Conflict in Ukraine spurs Europe's drive for clean energy03-06-2022, 12:14
US steel market sentiment becomes more price neutral05-05-2022, 10:15
Sign in with: