Earlier, the Committee for Economic Development of the Ukrainian Parliament supported the extension of the duty on the export of scrap, first introduced by Petro Poroshenko in 2016, for another 5 years. 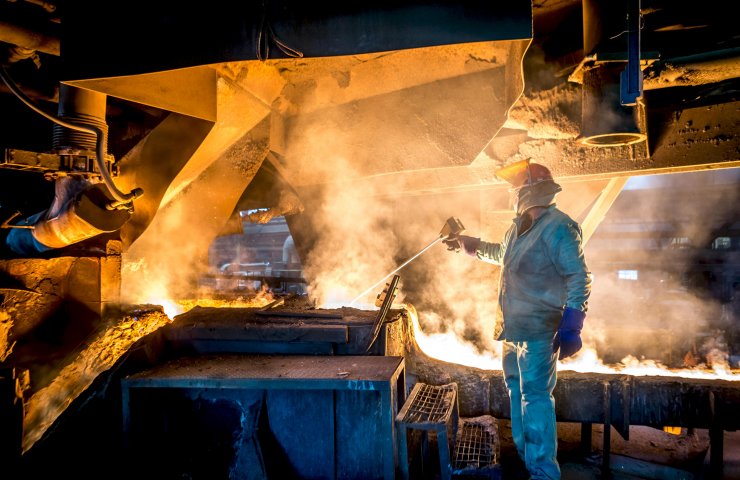 The Verkhovna Rada of Ukraine voted for the bill No. 5175, which provides for an extension of the duty on the export of ferrous scrap in the amount of 58 euros /ton for 5 years. A total of 291 deputies voted for the adoption of the bill, with the minimum required 226.

“The duty was first established in 2016 to moderate the export of scarce raw materials from Ukraine. The metallurgical industry, which provides 10% of the national GDP, 35% of merchandise exports and 200 thousand jobs, cannot work without it. After all, there is no technology that allows you to get steel without using scrap metal, "- wrote on Facebook co-author of the bill, Deputy Chairman of the Verkhovna Rada Committee for Economic Development Dmitry Kisilevsky.

According to him, the EU green course further increases the value of scrap as a raw material for metallurgy: its use in electric arc furnaces reduces CO emissions by up to 10 times 2 compared to classical technologies of steel production in converters and open-hearth furnaces .

“The duty has already proven its effectiveness. Before the adoption of the law on increasing the export duty, Ukrainian metallurgical enterprises experienced an acute shortage of scrap metal, as a result of which they reduced production volumes and were forced to stop working. So, only in the first year of the duty in 2016, the scrap deficit decreased from 20% to 11%, and at the end of last year, the deficit was actually overcome, "Oleksandr Kalenkov, President of Ukrmetallurgprom, commented on the adoption of the law.

He stressed that the extension of the duty guarantees additional GDP growth and the ability to save and create 25 thousand jobs.

For the first time, Ukraine introduced a duty on the export of scrap metal in September 2016, amid an acute shortage of scrap in the domestic market. At that time, President Petro Poroshenko signed a law providing for an increase for a period of 1 calendar year of the duty on the export of scrap from 10 euros to 30 euros per ton, while in 2017 the duty was extended for another year - until September 15, 2018.

At the same time, in April 2019, Poroshenko approved an increase in the duty on the export of scrap from 42 euros to 58 euros per ton and the extension of the duty until September 15, 2021.

Финансовая аналитика, прогнозы цен на сталь, железную руду, уголь и другие сырьевые товары. More news and analytics on Metallurgprom telegram channel - subscribe to get up-to-date market information and price forecasts faster than others.
Сomments
Add a comment
Сomments (0)
On this topic
The steel industry, the United States recognized itself the most energy efficient in the world
The Eurasian Commission has announced the final amount of duties on Ukrainian zinc
US imposed export restrictions against Ukraine, Russia, Venezuela and China
Time magazine named ecoactivists Greta Thunberg's man of the year
French Total took control of 6 Ukrainian solar power plants
Losses of Ukrainian industry from joining the European "Green Deal" will exceed half a
Recommended:
Australia and the UK aim to catch up and overtake China in the battery metal sector
Ukraine delivered 86,000 tons of iron ore to Turkey in September - TUIK
Zaporizhstal summed up the results of production in October 2022
News Analytics
China's iron ore output to rise in 2023 as new projects are launched30-11-2022, 18:10
"Centravis" agreed to supply a new batch of seamless pipes to a30-11-2022, 16:51
Metinvest enterprises in Ukraine resumed work after massive shelling of29-11-2022, 11:59
The European Council added the violation of restrictive measures (sanctions) to28-11-2022, 14:22
The abolition of export duty in India may reduce the price of Turkish steel28-11-2022, 14:07
Commodity prices will fall, metals quotes will rise slightly - Focus Economics28-11-2022, 13:28
Platinum market to face shortage next year - WPIC22-11-2022, 18:25
Global steel demand falls and will fall by 2.3% in 2022: WorldSteel19-10-2022, 23:12
Iron ore prices fall to 11-month low15-10-2022, 10:36
China production cuts in winter will give limited boost to steel markets -15-09-2022, 10:09
Sign in with: