The new crusher will be one and a half times more productive than the one currently operating at Poltava GOK and installed in its place without making any changes to the foundation. 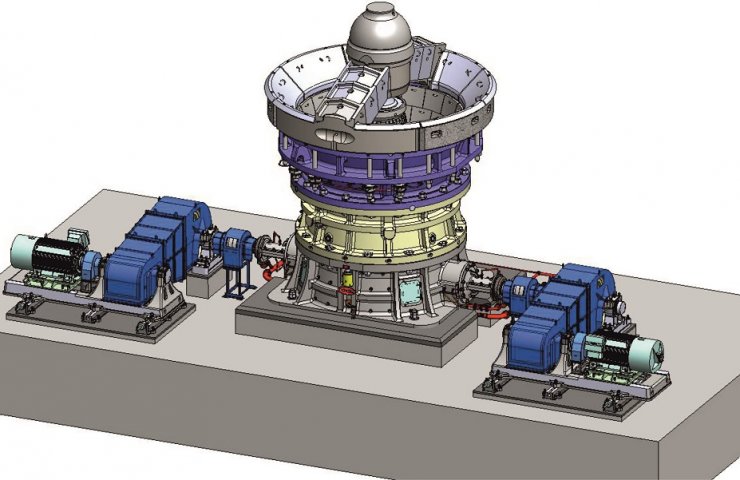 At the Novokramatorsk Machine-Building Plant (NKMZ), the issuance of documentation for the modernized cone crusher with hydraulic slot adjustment, model KKD1500x180 GRSCH-M, for the Poltava GOK has been completed.

It is currently under construction. As a result of the improved design of the crusher, its capacity will increase to 5.5 thousand tons per hour, which is 55% higher than that of the previously used crusher.

In a cone crusher, material is crushed by compressing it between two armor profiles. One profile is set by the armor of the cone, the other by the crushing bowl. During their gyratory motion (complex rotation in several planes), the material is ground under constant compression.

Novokramatorsk already produced cone crushers of this standard size, only of standard performance. Last year, such a crusher was manufactured and delivered to the Ingulets GOK, and today it is being installed at the customer's site.

The peculiarity of the new modernized crusher is that, at the request of the customer, it will be installed instead of the worn out and dismantled predecessor on the existing foundations.

While maintaining the overall dimensions of the new crusher, its higher productivity will be ensured due to the improvement of the design of the units that crush the material, as well as the increase in the drive power. So, the profile of the armor, the profile of the crushing chamber and the main nodes on which the armor rests have been changed. The cone rocking frequency has become higher.

Recommended:
Environmentalists promised to strengthen control over emissions of metallurgical plants in Mariupol
The final version of the Regulation on the Center for Certification of Special Steels and Alloys was approved
At a metallurgical plant in Dnipro, for the first time in Ukraine, they began to "collect" reactive electricity
On this topic
Uzbek metallurgists were satisfied with the progress of the order at NKMZ
Novokramatorsk Machine-Building Plant built two roadheaders of a new model P110-03
Installation of a spreader made by Ukrainian NKMZ continues in Uzbekistan
Igor Protynyak became the chairman of the board of Novokramatorsk machine-building plant
Novokramatorsky Mashinostroitelny Zavod re-entered the market of coke chemical equipment
ArcelorMittal Kryvyi Rih installed a new crushing line
Add a comment
Сomments (0)
News Analytics
Back to the future: Interpipe told how to develop the industry of Ukraine17-06-2021, 14:33
The Ministry of Energy of Ukraine will take part in the European Hydrogen Forum17-06-2021, 13:07
China will start selling metals from the state reserve to stabilize the rise in17-06-2021, 13:04
The capacity of the domestic market of rolled metal products of Ukraine17-06-2021, 11:41
Dneprospetsstal recertified production of rough railroad and locomotive axles17-06-2021, 10:21
Vaccinations fuel demand for platinum - World Platinum Investment Council08-06-2021, 12:55
Sharp price growth continues in the rolled metal market - Ukrpromvneshexpertiza08-06-2021, 11:04
Analysts note overheating of the global scrap metal market01-06-2021, 13:28
Hydrogen-fueled steelmaking could be competitive after 2050 - McKinsey19-05-2021, 14:22
Steel raw material prices are skyrocketing across the board18-05-2021, 12:34
Sign in with: