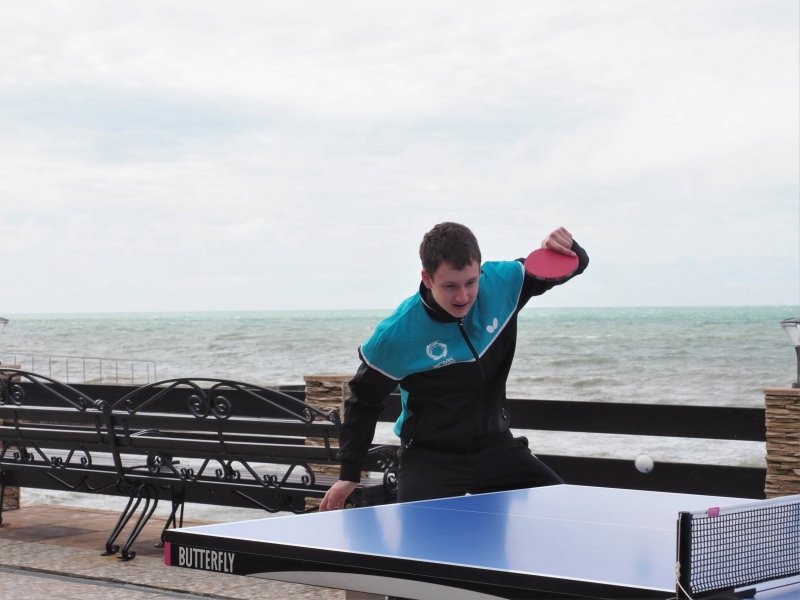 Before the tournament, our sportsmen took part in shooting a video for the European Table Tennis Federation and played on the Black Sea coast. Despite the wind, Maxim Kaburkin and Mikhail Rozhkov showed that table tennis can be played anywhere and in any conditions. The athletes were joined by the director of the UMMC Table Tennis Club Dmitry Balachenkov, who played with the first vice-president of the FNTR Oleg Zavalyuev.

“Everyone can play table tennis, be it a child or already an adult. And for this, practically nothing is needed, even a professional table: at one time we played on desks, and instead of rackets we used books, ”Dmitry Balachenkov said.

In the masterful tournament, tennis player from the UMMC Maxim Kaburkin won in the final, he beat Eduard Apaguni with a score of 3: 1. The bronze medal was won by Mikhail Rozhkov.

Festive events on this day were also held in Yekaterinburg, where the International Table Tennis Day was celebrated in gymnasium №212. It was attended by the club's senior coach, world and European champion Tatyana Kutergina, coaches Ilya Zhidkov and Stanislav Zlobin, tennis players Vera Smirnova, Maria Stepanova, Alexander Tyutryumov and Danila Travin, as well as the club mascot Rysik.

Masters of KNT UMMC showed the children the most spectacular elements of the game, and then stood at the tables with them. How to hold the racket correctly, how to serve the ball and how to hit it correctly - schoolchildren learned about everything from their own experience. But for many children this was not a revelation, because a table tennis section has been operating in the gymnasium for many years.

“I am very glad that there is such a holiday, International Table Tennis Day. This speaks of the recognition of our sport. Many people think that table tennis is such entertainment, racket to the left, racket to the right. In fact, it is a difficult but very interesting sport. And such meetings are very important for its popularization, "Tatiana Kutergina noted.

On this topic
UMMC tennis players won seven medals for the national team of the Sverdlovsk region
UMMC tennis players won silver in the team tournament at the Russian championship
Vladimir Gladkikh from UMMC Sambo Club - World Champion
The TMK Board of Directors recommends accepting the voluntary offer of the TMK subsidiary in
The best tennis players of Russia U11 have been identified in Verkhnyaya Pyshma
The best young tennis players of the country came to Verkhnyaya Pyshma
Добавить комментарий
Комментарии (0)
News Analytics
Iran is satisfied with the reaction of the world community to 60% enrichment of18-04-2021, 13:24
Gas prices in Ukraine have reached a record value over the past two years -16-04-2021, 17:24
Ukrmetallurgprom asks the Antimonopoly Committee to allow Metinvest to bid for16-04-2021, 17:23
A fatal accident occurred on the territory of the Dnieper Metallurgical Plant16-04-2021, 13:01
Cars built for Euro 2012 will be repaired at the Kryukov Carriage Works16-04-2021, 12:46
World Steel Association predicts a good year for metallurgists15-04-2021, 18:19
World Steel Association defines green steel and its variations12-04-2021, 13:14
China unlikely to cut steel capacity in 2021 due to high steel prices07-04-2021, 12:11
Scrap metal market at the beginning of April02-04-2021, 11:10
Rising Chinese Prices Fueled Rising Global Steel Prices - MEPS25-03-2021, 18:54
Sign in with: