SpaceX founder and Tesls CEO recalled that Earth and Mars approach each other at a distance sufficient for flights every two years. 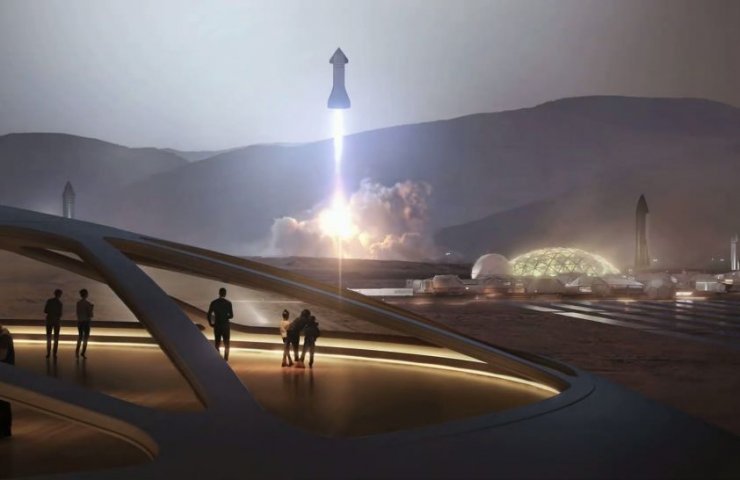 SpaceX founder Elon Musk believes that the first man will be able to land on Mars in six years. Under favorable conditions, this could happen in four years, he added.

“With a high degree of probability, I think within six years. If we are lucky, then maybe in four years ”, - answered Mr. Musk when asked about a possible landing on Mars, speaking at the Axel-Springen award ceremony. He noted that SpaceX will try to send a ship there without a team in two years.

In June, Musk announced that SpaceX intends to create a floating offshore platform on the coast of the Gulf of Mexico in Texas to launch rockets to the Moon and Mars. Then he explained that super-heavy rockets would be launched from spaceports for flights to the Moon, Mars and for hypersonic flights on Earth, adding that test flights would begin in two or three years.

In November last year, Musk said that to build a settlement that can independently function on Mars, about a thousand Starship ships and at least 3 million tons of resources and equipment will be required. Each launch will cost SpaceX about $ 2 million. He noted that Earth and Mars approach each other at a distance sufficient for flights every two years. Therefore, it will take about 20 years to deliver goods.

Recommended:
Ukrainian metallurgists are eagerly awaiting the abolition of mutual duties on steel by the EU and the USA
28 officials prosecuted for explosion at gold mine in East China
The largest Texas energy company files for bankruptcy
On this topic
NASA, Boeing, Bezos and Musk are heavily influenced by US election results
How Tesla became the world's most valuable automaker
Alexander Maksimovich Makarov - 114 years old
Yuzhmash told whether it is possible to launch reusable rockets from the Black Sea
How the reform of the electricity market in Ukraine can lead to a collapse and what to do about it
Stopped nuclear power plants and mines. What's going on in the energy sector of Ukraine?
Add a comment
Сomments (0)
News Analytics
Canada's economy plunges record 5.4% in 202002-03-2021, 21:42
UN Secretary General has called coal mines a past, from which it is time to02-03-2021, 20:44
Metallurgical enterprises of Ukraine increased earnings from the export of02-03-2021, 19:50
Trade union committee "Azovstal" received an answer to the question about the02-03-2021, 18:39
Greenhouse gas emissions returned and exceeded levels prior to the pandemic -02-03-2021, 14:16
Spread between raw materials and high strength alloy steel in Europe increased01-03-2021, 20:21
Increase in prices is forecasted in the markets of steel raw materials -26-02-2021, 09:25
Troy ounce of gold will drop $ 500 in two years - Fitch25-02-2021, 18:29
Global iron ore production growth to outstrip cumulative production in India23-02-2021, 10:22
Fitch Ratings Warns of “Shocking Impact” on Fossil Fuel Exporters18-02-2021, 14:44
Sign in with: