Volcano woke up in Iceland put up for sale

The Icelandic family, which owns the land on which the Fagradalsfjadl volcano awakened in March, is located, decided to put the site up for sale. The authorities are ready to allocate more than half a million dollars to turn the eruption site into a tourist attraction. 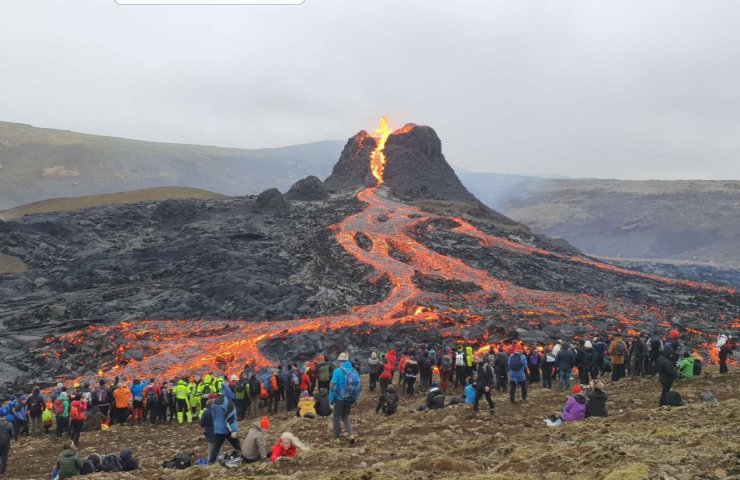 The Icelandic volcano Fagradalsfjadl, which woke up in March this year, was decided to be put up for sale. The Icelandic family, which owns the land on which the eruption occurred, has already received several offers from potential buyers, writes Bloomberg.

“This plot is for sale at a reasonable price, and we have already received at least two offers,” Anna Tordis Gudmundsdottir, one of 19 heirs who owns the Hraun farm, on the territory of which the volcano is located, told the agency.

Gudmundsdottir noted that the land had belonged to her family for several generations. According to her, for the past few years, the owners have been considering the possibility of putting the site up for sale, but have not done so before. The chairman of the Hraun landowners' association, Gudmundsdottir's cousin Sigurdur Gudjon Gislason, told the local broadcaster Stod 2 last week that those who wish can buy both the entire land plot and part of it.

Icelandic Prime Minister Katrin Jakobsdottir in an interview with RUV TV channel noted that the authorities do not plan to buy Hraun, but will allocate funds to turn the site of the volcanic eruption into a tourist attraction. The government is ready to provide 70 million kronor (more than $ 560,000) for the creation of the necessary infrastructure at this site, provided that it remains open to the public, Jakobsdottir said.

As noted by Bloomberg, the volcano is located just an hour's drive from Reykjavik and has the potential to become one of Iceland's most popular tourist destinations. Geologists predict that the eruption of Fagradalsfjadl may continue for several more years, the agency writes.

Gudmundsdottir noted that she herself is not interested in tourism, but would like someone else to build something good for the public there.

Fagradalsfjall has been sleeping for the last 6 thousand years and woke up on the evening of March 19. The eruption was preceded by increased seismic activity on the peninsula: more than 40 thousand earthquakes occurred there in four weeks. This was the first volcanic eruption on the Reykjanes Peninsula since the 12th century, Reuters reported. In a few hours, lava spilled over an area of ​​more than one square kilometer (or about 200 football fields).

The eruption site has gained popularity among the local population and tourists. Thousands of people came to watch the volcanic eruption, some of them even fried sausages for hot dogs on lava. Several popular musicians, including Icelandic singer Bjork and the band Kaleo, filmed the video against the backdrop of the volcano.