Over the next five years, we will experience a 1.5 ° C rise in global average temperature - WMO

It is likely that in the next five years we will feel what a 1.5 ° C increase in the global average temperature is. In order to prevent its further growth, it is necessary to accelerate the reduction of greenhouse gas emissions. This is warned by the authors of a new bulletin prepared by the World Meteorological Organization (WMO). 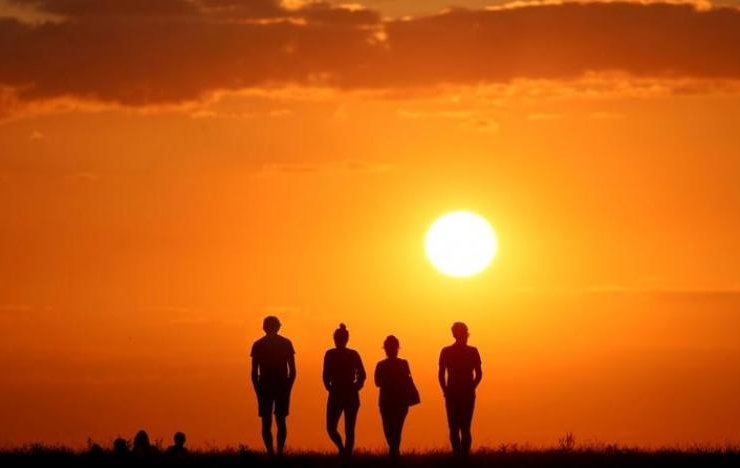 Over the next five years, the average annual temperature will be at least 1 ° C higher than pre-industrial indicators (until 1860-1900). Moreover, at least one year will break the temperature record in 2016 - meteorologists are 90 percent sure of this.

There is a good 40 percent chance that in any given year the temperature will temporarily increase by 1.5 ° C. It is this figure that appears in the Paris climate agreement as the maximum permissible - otherwise the world will face catastrophic and unpredictable consequences.

Experts also expect that in 2021-2025 in high latitudes and the Sahel, most likely, it will be more humid, and tropical cyclones in the Atlantic will become more frequent.

The findings are based on the experience of world renowned climatologists and data from the best forecasting systems from leading climate centers around the world.

“This research with a high level of scientific credibility shows that we are tangibly and inexorably approaching the threshold stated in the Paris Agreement on climate change,” said Professor Taalas. “This is another wake-up call that the world needs to accelerate its commitment to reducing greenhouse gas emissions and achieving carbon neutrality.”

At the same time, according to the head of the WMO, today technological advances make it possible to track greenhouse gas emissions down to their sources. This makes it possible to take targeted measures to reduce them.

Alarming forecasts of climatologists also force to take seriously the issues of adaptation to climate change. Only half of the 193 WMO Members have advanced early warning services. They are critical to minimizing the impact of extreme weather events, including in highly vulnerable areas such as health, water, agriculture and renewable energy.

The data released today only confirms the conclusions of the April WMO report "State of the Global Climate in 2020", which already noted sea level rise, melting sea ice and increased frequency of extreme weather events. 2020 itself was one of the three hottest on record, with average global temperatures 1.2 ° C above pre-industrial levels.

Experts today predict that in the next five years, the average annual global temperature is likely to be at least 1 ° C higher than pre-industrial values: in the range of 0.9 ° C to 1.8 ° C. A temporary warming of 1.5 ° C may be observed in the next few years.

Recall that the Paris Climate Agreement aims to keep the rise in global temperature this century within 1.5 ° C. National voluntary commitments to reduce emissions in their current form do not achieve this goal.

The UN believes that the current year, 2021, and the November talks on climate change in Glasgow should be a turning point in curbing climate change. Climate change will be high on the agenda of the G7 Leaders' Summit, which will take place in the UK on June 11-13.

Финансовая аналитика, прогнозы цен на сталь, железную руду, уголь и другие сырьевые товары. More news and analytics on Metallurgprom telegram channel - subscribe to get up-to-date market information and price forecasts faster than others.
Сomments
Add a comment
Сomments (0)
On this topic
Yuzhmash told whether it is possible to launch reusable rockets from the Black Sea
UN Secretary General urged to declare a state of emergency in the field of climate and proposed six
How Tesla became the world's most valuable automaker
What is the Internet of Things?
Who declared a state of emergency is not due to the outbreak of coronavirus in China, and due to
This day in history: the first launch of a unique Ukrainian rocket under the Sea Launch program
Recommended:
Coal production in China increased by 11% in January-August
China's Hainan Province to ban internal combustion engines by 2030
Zaporizhstal has reduced the output of metal products by 56% since the beginning of the year
News Analytics
The production of passenger cars in Russia decreased by 2.8 times in eight29-09-2022, 11:19
Donetsk and Torez electrotechnical plants will start producing electrical29-09-2022, 11:37
Ukrainian coking plants reduced gross coke production by 55.2%29-09-2022, 11:28
China ramps up investment in transport to bolster economy29-09-2022, 11:33
The heads of mining companies named the main risks for business29-09-2022, 10:03
China production cuts in winter will give limited boost to steel markets -15-09-2022, 10:09
Steel prices may rise as manufacturers stop production11-09-2022, 14:06
IREPAS: The global long products market is in a "dramatic situation"10-09-2022, 20:49
Steel prices are unlikely to rise significantly in the near future - analysts02-09-2022, 22:58
Steel prices may move up on new data from China31-08-2022, 12:19
Sign in with: