Calibrated, 8 x 22 mm Dutch horseshoes were used as inventory - these are the most powerful horseshoes in the world. 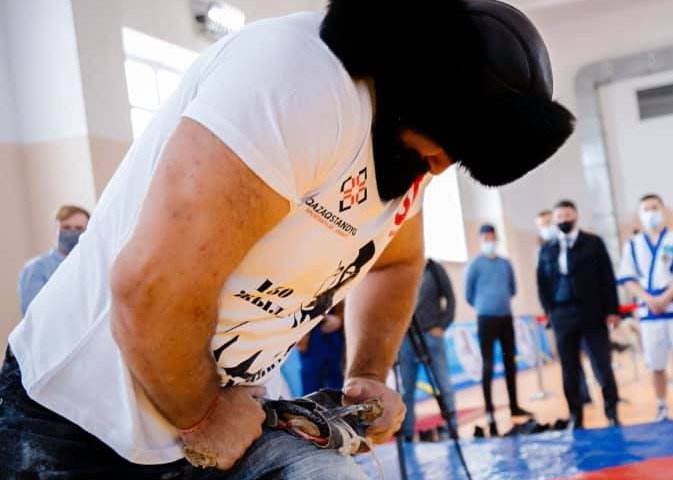 A new world record for unbending horseshoes was set in the village of Kazhymukan in the Akmola region of Kazakhstan on Wednesday in honor of the 150th anniversary of Kazakh wrestler Kazhymukan Munaitpasov. This was announced today by the Kazakhstan Athletes Union.

“This record is very significant to me. Today is the birthday of the legendary wrestler, my spiritual mentor, teacher Kazhymukan Munaitpasov. I planned to straighten three horseshoes, but it turned out four. Each horseshoe can carry a weight of 940 kilograms. Preparation for the record has been going on for 12 years, all this time I have been promoting strength culture, "- shared his impressions of the world record holder in strength numbers Sergei Tsyrulnikov.

“We have specially checked - these metal horseshoes are made of hardened metal, withstand a load of about 940 kilograms. These horseshoes are not familiar to us, they are made in the Netherlands, and they are rightfully considered the most durable in the world. This is the uniqueness of this ", - said the representative of the book of records Kuandyk Kudaibergenov.

Recommended:
German concern Thyssenkrupp sold six 212 CD class submarines to Germany and Norway
ArcelorMittal Temirtau drone army replenished with three more fighters
Specialists of SE "Antonov" ensured the urgent transfer of mining equipment from Australia to Brazil
On this topic
High-speed railway line will connect the south of Kazakhstan and the capital of Uzbekistan
A system of "Smart regulation" of business will be created in Kazakhstan
Yuzhmash told whether it is possible to launch reusable rockets from the Black Sea
The hands on the clock "doomsday" shifted to 20 seconds closer to midnight
The transition to a carbon-free economy is actually not as expensive as they say - the experts
Iran plans to capture 20% of the copper market in Turkey
Add a comment
Сomments (0)
News Analytics
Iran is satisfied with the reaction of the world community to 60% enrichment of18-04-2021, 13:24
Gas prices in Ukraine have reached a record value over the past two years -16-04-2021, 17:24
Ukrmetallurgprom asks the Antimonopoly Committee to allow Metinvest to bid for16-04-2021, 17:23
A fatal accident occurred on the territory of the Dnieper Metallurgical Plant16-04-2021, 13:01
Cars built for Euro 2012 will be repaired at the Kryukov Carriage Works16-04-2021, 12:46
World Steel Association predicts a good year for metallurgists15-04-2021, 18:19
World Steel Association defines green steel and its variations12-04-2021, 13:14
China unlikely to cut steel capacity in 2021 due to high steel prices07-04-2021, 12:11
Scrap metal market at the beginning of April02-04-2021, 11:10
Rising Chinese Prices Fueled Rising Global Steel Prices - MEPS25-03-2021, 18:54
Sign in with: