Trump wants to ease environmental restrictions on the US mining industry

If the team of outgoing President Trump manages to make the planned changes to the US subsoil use rules, it will be very difficult for Biden's team to reverse some of them. 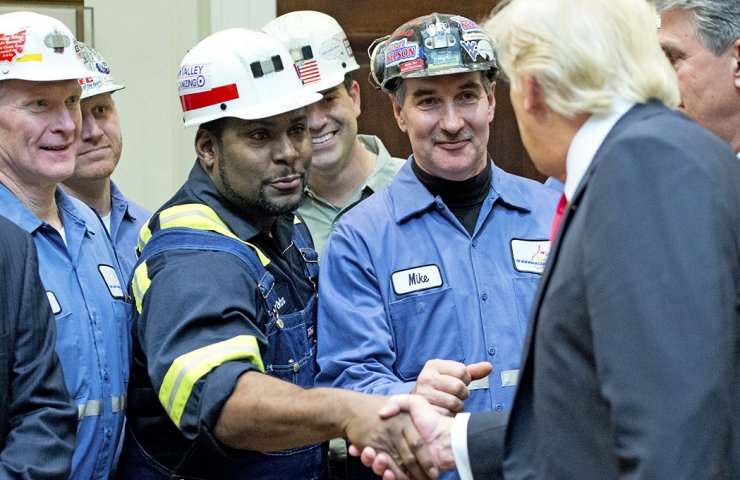 The administration of outgoing US President Donald Trump is set to loosen mining regulations and give the green light to new mining projects before leaving office this month, without Joe Biden being able to reverse some of the changes.

Administration officials told Reuters they plan to publish a series of decisions on January 15 that will expand miners' access to federal lands, finalize Lithium Americas Corp's Nevada lithium mine, and approve a land swap for Rio's Arizona copper project. Tinto Ltd. and will take a number of other revolutionary steps.

Biden will only be able to reverse some of Trump's changes, especially the proposed rules pending regulatory review. But some of Trump's moves will be either irreversible or require Biden to restart the lawmaking process that has been going on for many years.

Trump administration officials are finalizing legislative rule changes that will add the US mining industry to the fast-track permitting industry, as part of a Republican-finalized law signed by former President Barack Obama in 2015.

The law, known as FAST-41, was intended to make it easier to issue permits for utility projects such as power lines.

"Congress never envisioned FAST-41 to cover the mining sector," US Representative Raul Grijalwa of Arizona, chairman of the House of Representatives' Natural Resources Committee, wrote late last month in an attempt to stop the change.

“The American mining industry is key to successfully rebuilding our nation's infrastructure,” said Rich Nolan, President of the NMA.

Biden's Transition Team said its new administration “January 20 will begin to take swift and bold action across the federal government to reverse the Trump administration's harmful policies, including climate and environmental policies, to halt or postpone Trump's devastating midnight rules. ”

Trump officials are also on the verge of approving several mining projects or significantly advancing the regulatory review process.

One, the Lithium Americas Thacker Pass project in Nevada, is expected to be approved on January 15th, according to an official from the Bureau of Land Management.

“It was a good process of working with the state and federal authorities. We look forward to this decision, ”said John Evans, CEO of Lithium Americas, which has been developing the project for over a decade. Lithium is a key component in electric vehicle batteries.

At least 10 other projects have been deemed important enough for the recovery of the US economy after the coronavirus pandemic, so they must receive expedited approval in accordance with a presidential decree signed last June.

Several gold and phosphate fertilizer projects in Nevada and Idaho, respectively, have also either recently been approved by Trump or have seen significant improvements in the permitting process.

At the end of December, the court imposed a temporary ban on the project, pending full review.

In South Dakota, the Dewey-Burdock uranium mine received several important permits from the US Environmental Protection Agency in November, although other permits will be required to open it. The mine, like the Rio project in Arizona, is vehemently opposed to Indian tribes who claim it will pollute their waters.

In Arizona, Trump's plans to approve the land swaps required by Rio to build a copper mine have met with stiff resistance from Native Americans who regard the land as sacred. Last year, Rio fired its CEO after overseeing the destruction of sacred indigenous caves in Australia.

Its new CEO has pledged to "restore trust" among indigenous peoples, although Native Americans say the company is prepared to make the same mistake in Arizona as it did in Australia.

Финансовая аналитика, прогнозы цен на сталь, железную руду, уголь и другие сырьевые товары. More news and analytics on Metallurgprom telegram channel - subscribe to get up-to-date market information and price forecasts faster than others.
Сomments
Add a comment
Сomments (0)
On this topic
Australian aborigines fired boss of world's largest mining company
The natives refused to accept Rio Tinto after the blasting of their sacred caves in the Pilbara
Australia launched an investigation into the destruction of "sacred caves" in the Pilbara
Port on the coast of Pilbara in Australia stops shipments of iron ore due to fire
Rio Tinto was looking for copper, but found gold
Rio Tinto Capitalization Reaches Record Level Amid Rising Ore Prices
Recommended:
Russia will allocate more than $700 million for the production of domestic aircraft engines
Energy efficiency investment worldwide tops $1 trillion in 2 years
The abolition of export duty in India may reduce the price of Turkish steel
News Analytics
Chinese steel exports up 28.2% - customs data07-12-2022, 23:43
UK approves construction of new coal mine for the first time in 30 years07-12-2022, 23:29
Analysts predict 5% annual growth in the iron casting market through 203006-12-2022, 12:44
Oman to build a new steel plant worth $3 billion in 3 years06-12-2022, 12:14
Tesla's Shanghai gigafactory set a new record for electric vehicle shipments in05-12-2022, 15:24
Analysts predict 5% annual growth in the iron casting market through 203006-12-2022, 12:44
Commodity prices will fall, metals quotes will rise slightly - Focus Economics28-11-2022, 13:28
Platinum market to face shortage next year - WPIC22-11-2022, 18:25
Global steel demand falls and will fall by 2.3% in 2022: WorldSteel19-10-2022, 23:12
Iron ore prices fall to 11-month low15-10-2022, 10:36
Sign in with: