In Russia began to produce Il-76 aircraft on the conveyor

The first Il-76MD-90A, assembled at the assembly line in Ulyanovsk, has been submitted for testing. 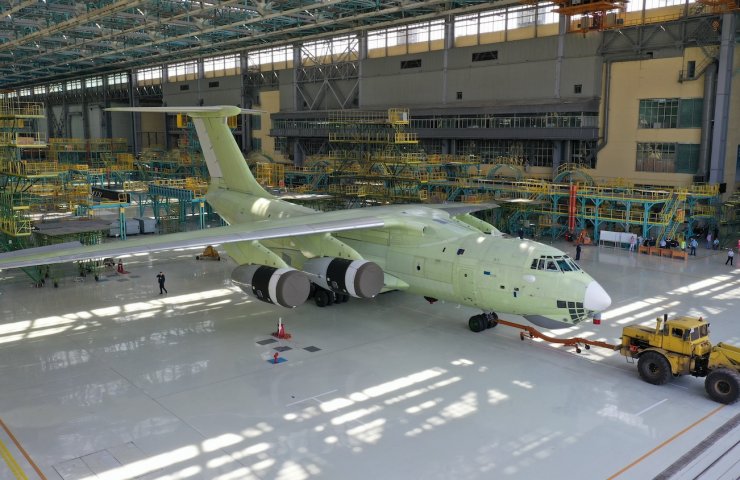 The first heavy transport aircraft Il-76MD-90A, assembled on a new assembly line at the Ulyanovsk JSC Aviastar-SP of the transport aviation division of the United Aircraft Corporation, was transferred to the flight test station of the aircraft plant for ground and flight tests.

“For the enterprise, this is a landmark event that confirms the ability of the Ulyanovsk aircraft manufacturers to effectively solve the most important tasks. The introduction of a new technological process in the future will contribute to increasing the volume of serial production of more than ten aircraft per year, "said Sergey Sheremetov, Managing Director of Aviastar-SP JSC.

Unlike the previously used technology, the new assembly line at Aviastar-SP JSC will reduce the labor intensity of aircraft assembly by 38%. The line consists of ten work stations for docking the fuselage, wing, tail sections and stations for the installation of aircraft power plants and systems. It is equipped with a laser positioning system of the units, which ensures high accuracy of docking of all aircraft elements.

Recommended:
The Russian government approved a point system for assessing the level of localization in shipbuilding
The final version of the Regulation on the Center for Certification of Special Steels and Alloys was approved
Interpipe has mastered a new type of railway wheels for Deutsche Bahn passenger trains
On this topic
For the first time in China, 500-meter rails were laid in automatic mode (Video)
Rostec will launch the production of ultra-fast charging stations for electric vehicles
JSC «Dneprotyazhmash» Has Made Its First Matte Ladle
Korean auto makers will switch to hydrogen engines with help from Chinese steelmakers
5 of the 10 most expensive aircraft belongs to the Russian metallurgists
Investigation results: The crash of the Boeing 737 Max Lion Air was caused by a combination of 9
Add a comment
Сomments (0)
News Analytics
China's Machinery Sector Operating Income Increases 43 Percent13-06-2021, 11:28
Rescuers continue to search for 13 missing iron ore miners in North China12-06-2021, 15:39
European Union extends protective quotas on steel supplies for another three12-06-2021, 11:31
Metallurgical plants in the temporarily occupied territory of Donbass appointed12-06-2021, 10:59
JSC "Turboatom" was visited by representatives of CJSC "Novokramatorsk Machine12-06-2021, 10:43
Vaccinations fuel demand for platinum - World Platinum Investment Council08-06-2021, 12:55
Sharp price growth continues in the rolled metal market - Ukrpromvneshexpertiza08-06-2021, 11:04
Analysts note overheating of the global scrap metal market01-06-2021, 13:28
Hydrogen-fueled steelmaking could be competitive after 2050 - McKinsey19-05-2021, 14:22
Steel raw material prices are skyrocketing across the board18-05-2021, 12:34
Sign in with: