Liquid rocket engine РД861К is part of the third stage of the carrier rocket "Cyclone-4" and is designed for propulsion and maneuvering. 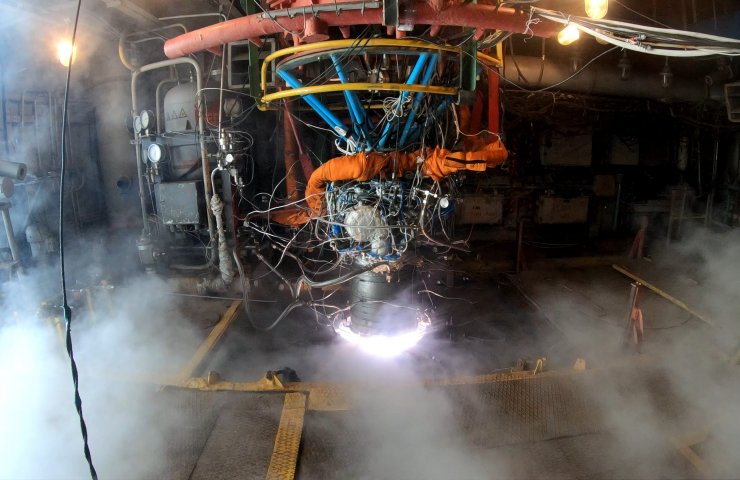 the tests (three series of five inclusions with a total duration 1601,6 seconds) finished a full cycle of ground tests of the engine and finally confirmed the operability of selected structures, systems and components of the engine within the range of specified operating conditions, matching the basic characteristics РД861К specified in Technical specifications. It was the final and most important ground tests, which confirmed the readiness of the engine for flight tests in the composition stage of LV.

Recall that РД861К is the engine of the upper stage of the launch notices, with a turbopump feed system components fuel, without afterburning gas and its injection in a supercritical part of the nozzle. The engine is able to provide reusable launch and thrust vector control through the channels of pitch and yaw in space during insertion of the payload into the target point of the trajectory.

Liquid rocket engine РД861К is part of the third stage rocket "Cyclone-4", intended for propulsion and maneuvering. The engine you plan to use as the main engine of the second stage of the new carrier rocket "Cyclone-4M".

Финансовая аналитика, прогнозы цен на сталь, железную руду, уголь и другие сырьевые товары. More news and analytics on Metallurgprom telegram channel - subscribe to get up-to-date market information and price forecasts faster than others.
Сomments
Add a comment
Сomments (0)
On this topic
Yuzhmash told whether it is possible to launch reusable rockets from the Black Sea
Yuzhmash has successfully tested the upper stage of the Cyclone-4 launch vehicle
Ukrainian-powered Antares launch vehicle successfully launched from Wallops cosmodrome
The space program of Yuzhmash and the Yuzhnoye design bureau received an award from the
The threat of an emergency man-made situation at Yuzhmash is real - the conclusions of the
Yuzhmash: "human factor" could be the reason for the failure of Vega rocket launch
Recommended:
AvtoVAZ returned to a full working week amid growing demand for new LADA
Ukraine's foreign exchange earnings from the export of ferrous metals decreased by $4 billion
UK government to set up Critical Minerals Agency
News Analytics
Ukrainian court invalidated sale of Ferrexpo Plc shares in 200222-09-2022, 12:45
EU Commission not doing enough to save aluminum industry - associations21-09-2022, 11:07
Steel market in Europe expects big production cuts due to weak demand20-09-2022, 11:13
Ford warns investors to cut car deliveries due to parts shortages20-09-2022, 10:43
The price of lithium resumes insane growth after Elon Musk's remarks20-09-2022, 10:54
China production cuts in winter will give limited boost to steel markets -15-09-2022, 10:09
Steel prices may rise as manufacturers stop production11-09-2022, 14:06
IREPAS: The global long products market is in a "dramatic situation"10-09-2022, 20:49
Steel prices are unlikely to rise significantly in the near future - analysts02-09-2022, 22:58
Steel prices may move up on new data from China31-08-2022, 12:19
Sign in with: