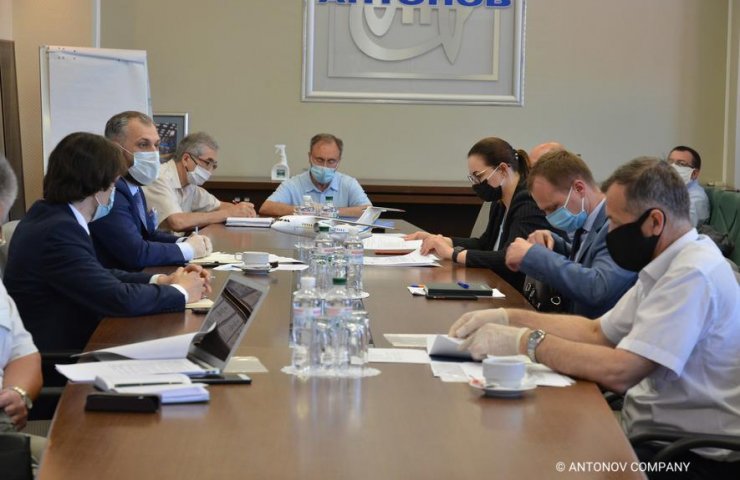 At the end of this week, on the territory of the state enterprise "Antonov" has started a working group on preparation of proposals in the draft programme of revival of the aviation industry of Ukraine for the medium term. According to the order of the state concern "Ukroboronprom" the Chairman of the working group appointed Bondar Roman Vladimirovich, Deputy Director General transformation of the group, Deputy Chairman - Moose Alexander, acting President of SE Antonov.

"the Development and approval of the government program - the long-awaited event for the aviation industry. This will ensure the financing of domestic aircraft, will enable our customers - the defense Ministry and interior Ministry to satisfy their own demand for the aircraft, and for "Antonov" - to get the starting momentum for the development of Russian aircraft industry", - said Roman Bondar.

In the first working group meeting also took part Deputy Minister of economic development and agriculture Yulia Sviridenko. It will coordinate the preparation and presentation of the concept of development of the aviation industry for review by the government Committee for further development of the budget Declaration for 2021.

the Proposed concept of development of the Ukrainian aviation industry consists of five main programmes that address the strategic directions of financing.

the aim of the programme is to create conditions for the implementation of projects of innovative research and development of new competitive technologies, materials, production processes and equipment, testing, implementation and introduction of which will allow you to develop examples of new models serial, upgraded passenger and transport aircraft, helicopters, engines, other aircraft and will also facilitate its export to foreign markets.

Recommended:
Zaporizhstal donated a new oxygen station to the Zaporizhzhya Regional Infectious Diseases Hospital
Electrotyazhmash was allowed to overhaul the rolling stock of Ukrzaliznytsia
Production of metal products in Donetsk region in March decreased by 5.5%
On this topic
Guide Dreamlifts Ltd decided not to renew the cooperation with the Antonov company
NATO expressed gratitude to the state enterprise "ANTONOV" for the work in the framework of SALIS
In the canadian office of ICAO, a model of the Ukrainian aircraft An-225 "Mriya"
Druzhkovsky engineering declares that he is not bankrupt
Businessman Yaroslavsky will turn the Kharkov tractor plant in Ekopolis (Video)
"Antonov" and "KLEYNOD" will create a collection of designer hours
Add a comment
Сomments (0)
News Analytics
Rinat Akhmetov's engineering company Corum Group sent a delegation to India05-05-2021, 21:09
A mining and metallurgical complex will be created in the Bayan-Undur somon of05-05-2021, 19:39
In Ukraine, European requirements for the ecodesign of solid fuel boilers will05-05-2021, 15:30
April steel production of "Zaporizhstal" increased in annual comparison by05-05-2021, 15:27
Germany plans to achieve carbon neutral economy by 204505-05-2021, 12:28
The current state of the market is ideal for the sale of rolled steel - IREPAS04-05-2021, 18:41
Global hydrogen demand to grow 7-fold by 2070 - PwC21-04-2021, 12:31
World Steel Association predicts a good year for metallurgists15-04-2021, 18:19
World Steel Association defines green steel and its variations12-04-2021, 13:14
China unlikely to cut steel capacity in 2021 due to high steel prices07-04-2021, 12:11
Sign in with: