Herman Galuschenko and Anka Feldgusen noted the importance of the Statement on German-Ukrainian Energy Partnership signed in August last year. 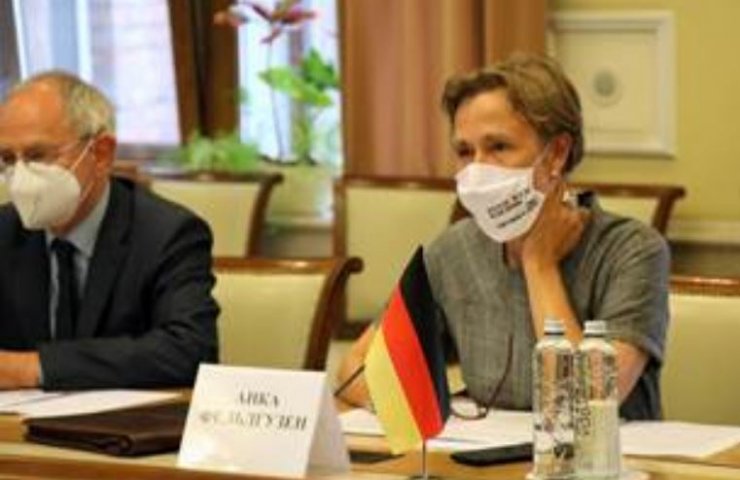 The Minister of Energy of Ukraine Herman Galushchenko discussed with the Ambassador Extraordinary and Plenipotentiary of the Federal Republic of Germany to Ukraine Anka Feldgusen the priorities of the Ukrainian-German energy partnership.

Anka Feldgusen stressed that Ukraine has significant potential in the energy sector for mutually beneficial cooperation, including on projects for the production and transportation of hydrogen.

Herman Galushenko confirmed the importance of the development of hydrogen energy and, in this context, the prospects for using the infrastructure of the gas transmission system of Ukraine.

The parties identified the possibilities for further implementation of projects for the transformation of coal regions, the development of hydrogen energy, energy efficiency and decarbonization.

Separately, the parties discussed the process of synchronization of the unified energy system of Ukraine with the European energy system ENTSO-E.

“Synchronization with the European power system is what we are implementing in the near future. The decision initiated by the Ministry of Energy to ban the import of electricity from the Russian Federation and Belarus is one of the steps to accelerate this integration, ”said German Galushchenko.

Финансовая аналитика, прогнозы цен на сталь, железную руду, уголь и другие сырьевые товары. More news and analytics on Metallurgprom telegram channel - subscribe to get up-to-date market information and price forecasts faster than others.
Сomments
Add a comment
Сomments (0)
On this topic
"Naftogaz" has filed a lawsuit against the government of Ukraine for the issuance of a
At a metallurgical plant in Dnipro, for the first time in Ukraine, they began to
Dniprovsky Metallurgical Plant switches to alternative heating
French railroad workers bought a "daughter" of the bankrupt British Steel
US Secretary of State announced sanctions against Turkey over purchase of S-400 from Russia
The new Minister of Finance of Ukraine: cooperation with the IMF is "an absolute priority"
Recommended:
Coal production in China increased by 11% in January-August
UK government to set up Critical Minerals Agency
For 8 months of 2022, steel production in Ukraine fell by 64.5%, to 5.2 million tons
News Analytics
The production of passenger cars in Russia decreased by 2.8 times in eight29-09-2022, 11:19
Donetsk and Torez electrotechnical plants will start producing electrical29-09-2022, 11:37
Ukrainian coking plants reduced gross coke production by 55.2%29-09-2022, 11:28
China ramps up investment in transport to bolster economy29-09-2022, 11:33
The heads of mining companies named the main risks for business29-09-2022, 10:03
China production cuts in winter will give limited boost to steel markets -15-09-2022, 10:09
Steel prices may rise as manufacturers stop production11-09-2022, 14:06
IREPAS: The global long products market is in a "dramatic situation"10-09-2022, 20:49
Steel prices are unlikely to rise significantly in the near future - analysts02-09-2022, 22:58
Steel prices may move up on new data from China31-08-2022, 12:19
Sign in with: