The project for the construction of An-74TK-200 aircraft in Quebec will become key not only for the aerospace industry of Ukraine and Canada, but also for the economies of both countries in general, the state defense concern of Ukraine said. Earlier, the Antonov State Enterprise asked the media to stop disseminating this information as untrue. 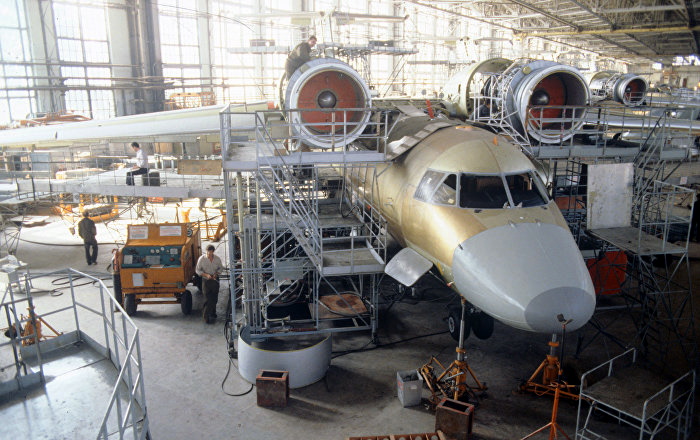 Antonov SE and the government of Quebec are ready to facilitate the signing of an agreement between the Ministry of Strategic Industries of Ukraine, the State Concern Ukroboronprom and its enterprises on the production of An-74TK-200 aircraft in Quebec for international markets, including North American ones. About this on its official website reported the Canadian Capital Hill Group (CHG), which has been a leader in government relations in Canada for over 25 years.

“This project will become key not only for the aerospace industry of Ukraine and Canada, but also for the economies of both countries in general”, - noted in Ukroboronprom. According to the press service of the concern, it is planned to develop a number of modifications of the basic model of civil and special-purpose aircraft, possibly thanks to the many years of experience of the Antonov State Enterprise specialists, who produce bold and effective engineering solutions.

The final assembly of the model will be organized at production facilities in Ukraine and Canada.

"Successful certification of the aircraft model and its production will allow the Ukrainian aviation industry to get out of the protracted crisis," the Ukroboronprom noted.

The Antonov-Canada company was created to promote aircraft designed and manufactured at the Antonov State Enterprise on the international market. The primary task of the Antonov and Antonov-Canada companies is to organize cooperation and establish the work of the design bureau for research and development, previous processing and testing, on the basis of which a model of an aircraft for flight tests is made.

The most promising for the implementation of this ambitious goal is the model of the An-74TK-200 aircraft, developed by the Antonov Design Bureau, which until now has been massively produced by the Kharkov State Aviation Production Enterprise.

The An-74TK-200 aircraft is designed to carry 52 passengers, cargo weighing up to 10 tons, as well as mixed passenger and cargo transportation on international short and medium-range air routes. The maximum take-off weight of the aircraft is 36.5 tons, the maximum flight height is 10100 m, the cruising speed is 600-700 km /h, the flight range with a load of 10 tons is 950 km, with a load of 1.8 tons it is 4250 km. The crew consists of two people.

The aircraft can be used in particularly harsh operating conditions, such as arctic or alpine, temporary, natural, limited runways with minimal or no support infrastructure, which is undoubtedly the market advantage of this aircraft model.

In addition to the advantages, the basic model AN-74TK-200 has a number of disadvantages that limit or exclude the satisfaction of market demand. First of all, this concerns the critical dependence on the use of a significant number of components produced in the territory of the Russian Federation, which, moreover, do not meet modern requirements, which, in turn, does not allow obtaining mandatory certification of aircraft in European and American markets.

Recall that on June 1, the Canadian Commercial Corporation (KKK) and the State Concern "Ukroboronprom" signed a Memorandum of Understanding between KKK and SC "Ukroboronprom" on cooperation in the field of strategic security, defense, aerospace activities and ammunition production.

In addition, within the framework of the Memorandum, the State Concern "Ukroboronprom", the State Joint Stock Holding Company "Artem" and the Canadian company GL Munitions Inc. signed an Agreement on cooperation in the production of small arms ammunition.

Финансовая аналитика, прогнозы цен на сталь, железную руду, уголь и другие сырьевые товары. More news and analytics on Metallurgprom telegram channel - subscribe to get up-to-date market information and price forecasts faster than others.
Сomments
Add a comment
Сomments (0)
On this topic
SE "Antonov" plans to produce its military transport aircraft An-74 in Canada
SE "Antonov" in Canada will build a completely new aircraft - the statement of the company
"Ukroboronprom" introduces to "Antonov" Supervisory Board
Yuzhmash told whether it is possible to launch reusable rockets from the Black Sea
In Ukraine created the working group on the revival of domestic aviation industry
"Ukroboronprom" announced the curtailment of the reform of the country's
Recommended:
Minister of Energy of Kazakhstan visited ArcelorMittal Temirtau
Chinese scientists discover previously unknown mineral in lunar soil samples
US chip makers caught in crossfire of sanctions
News Analytics
Moody's changed the outlook for the global mining industry to26-09-2022, 19:04
Russia may increase taxation of oil, gas, coal and fertilizers26-09-2022, 15:58
UK steel production hits record low this year26-09-2022, 15:07
Ukrainian court invalidated sale of Ferrexpo Plc shares in 200222-09-2022, 12:45
EU Commission not doing enough to save aluminum industry - associations21-09-2022, 11:07
China production cuts in winter will give limited boost to steel markets -15-09-2022, 10:09
Steel prices may rise as manufacturers stop production11-09-2022, 14:06
IREPAS: The global long products market is in a "dramatic situation"10-09-2022, 20:49
Steel prices are unlikely to rise significantly in the near future - analysts02-09-2022, 22:58
Steel prices may move up on new data from China31-08-2022, 12:19
Sign in with: