On Saturday, a landing of high-ranking officials landed at the Kryukovsky Carriage Works

Ministers, deputies and various chiefs checked how the Kremenchuk car builders were preparing to fulfill the contract for the production of 100 passenger cars for the Ukrainian railway. 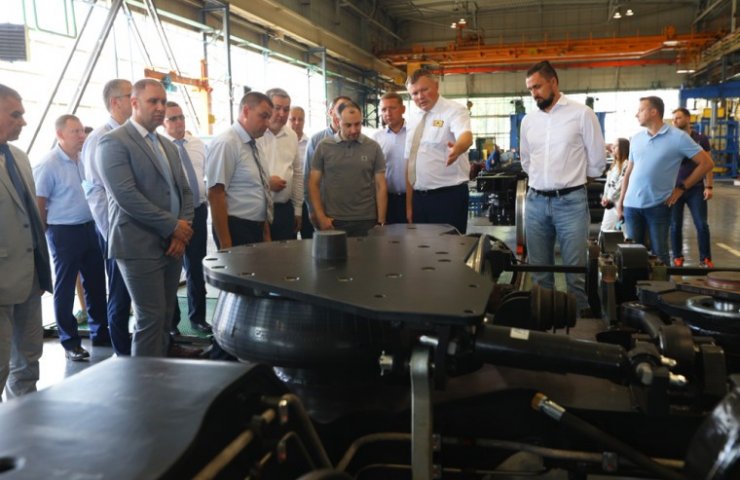 On August 14, despite the day off, there was a revival at the Kryukov Carriage Works. The car builders of Kremenchug received honored guests, including the Minister of Infrastructure of Ukraine Oleksandr Kubrakov with his advisers Oleksandra Azarkhina and Yevgeny Petroshchuk, Acting Chairman of the Board of JSC “Ukrzaliznytsia” Oleksandr Kamishin, Acting Oleksandr Pertsovskiy, member of the company's board of directors, Oleksandr Krasnoshtan, head of the suburban transportation service of the South-West Railway regional branch, Mykola Umanets, executive director of the Southern Railway regional subsidiary, Oleksandr Kava, Deputy Finance Minister of Ukraine, and Oleg Sinegubov, head of the Poltava Regional State Administration,

The program of the event provided for a visit to OJSC KVSZ as an executor of the state order for the manufacture of 100 passenger cars for Ukrzaliznytsia and inspection of the construction of the Kryukovsky Bridge, which is taking place within the framework of the Big Construction Project.

At noon, the delegation was met by the heads of the joint-stock company, headed by the chairman of the supervisory board, Vladimir Prikhodko, who immediately began to acquaint the guests with the engineering potential, production facilities and products of the enterprise. First, they demonstrated the holy of holies - the design and development department - the place where cars, running gears for them and other complex equipment manufactured at KVSZ are born in the drawings and calculations. Chief Designer Oleg Shkabrov demonstrated how, step by step, designers create new cars using modern engineering programs, and talked about the advantages of Kryukov car builders' developments.

After that, the delegation examined our blank production in the assembly and welding building, where, with the help of modern metal-cutting and other intelligent machine tools with numerical control, engineering ideas are materialized into the elements of future cars.

The participants of the meeting also examined the testing base of the enterprise and the testing ground where car builders test their equipment. And then they could feel like passengers of diesel trains and other social cars.

The excursion of the country's top leadership ended with a demonstration by the enterprise of the capacities of freight car-building, which, unfortunately, due to the lack of orders today are practically idle, although they are designed to produce 12,000 cars per year.

Финансовая аналитика, прогнозы цен на сталь, железную руду, уголь и другие сырьевые товары. More news and analytics on Metallurgprom telegram channel - subscribe to get up-to-date market information and price forecasts faster than others.
Сomments
Add a comment
Сomments (0)
On this topic
DSS supported the idea of localization of production in Ukraine electric locomotives
"Zaporizhstal" was visited by a member of the Board of JSC "Ukrzaliznytsya"
The European Union has opposed the adoption of Ukraine's law on localization of production
Serhiy Leshchenko will make Ukrzaliznytsya to fight corruption from the inside
In Paris to discuss the implementation details of a water supply project of Mariupol
Zaporizhstal exported about 900 thousand tons of rolled metal along the Dnieper
Recommended:
EU Green Deal should encourage investment in mild steel projects: Eurofer
Steel production in China rose in the first decade of January
Dneprovsky Metallurgical Plant continues to operate rolling shops using tolling raw materials
News Analytics
Eurofer expects EU steel demand to fall 4.6% in 2022 and 1.6% in 202305-02-2023, 13:31
EU Green Deal should encourage investment in mild steel projects: Eurofer02-02-2023, 16:32
Belarusian steel plant to operate at full capacity from February02-02-2023, 16:56
British Steel considers cutting up to 1,200 jobs at Scunthorpe02-02-2023, 11:50
Electric vehicles will play a key role in US aluminum production growth - Norsk01-02-2023, 12:17
European stainless steel producers ready to raise prices31-01-2023, 16:16
S&P: Russia will continue to dominate the steel export market in the Black05-01-2023, 11:22
Fitch Analysts Predict Big Drop in Global Steel Consumption This Year14-12-2022, 13:59
Analysts predict 5% annual growth in the iron casting market through 203006-12-2022, 12:44
Commodity prices will fall, metals quotes will rise slightly - Focus Economics28-11-2022, 13:28
Sign in with: