The latest poll of chief economists from the World Economic Forum shows that most of them expect global GDP to recover to pre-COVID-19 levels by the first half of 2022. 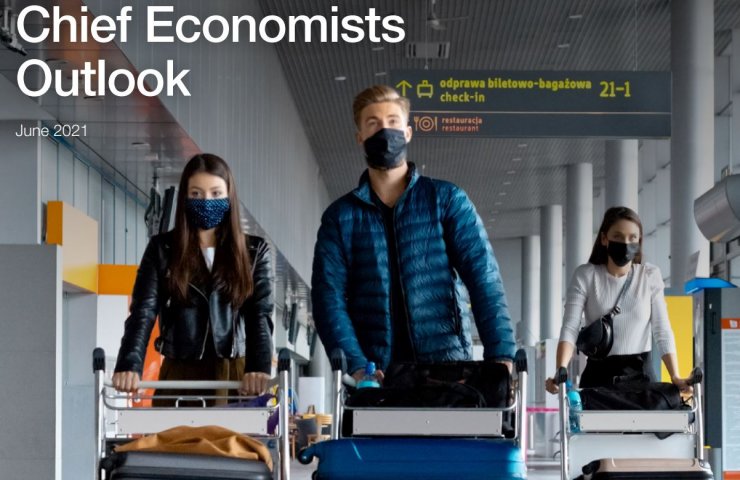 Respondents to the latest survey of chief economists from the World Economic Forum believe that growth rates in 2021 are around 6%, and most of them expect global GDP to recover to pre-COVID-19 levels by the first half of 2022.

At the same time, respondents see the greatest risk for the world economy from a delayed wave of bankruptcies, followed by a crisis in the labor market. Another threat that can also disrupt recovery and future growth is large-scale cyberattacks, including from government actors.

According to surveyed economists from the World Economic Forum, the greatest tension or potential for conflict at the international level arises from cyberattacks, followed by tensions in technology and trade.

The tougher the pressure within the country, the more the internal political forces will be tempted to step up protectionist measures. In the current conditions of relative detente, tensions between the major powers remain and are expected to intensify in the medium term.

While the high level of interconnectedness today may counteract political efforts to further escalate such tensions, the rhetoric of self-reliance is growing louder, and interdependence with other countries is portrayed by some politicians as vulnerability rather than a source of mutual benefit.

The COVID-19 crisis has made it clear that trade relations between countries cannot be taken for granted, as health measures and national interests take precedence, experts said.

The World Economic Forum recommends focusing on tackling climate issues so that countries with different political interests can work together.

“As new recovery efforts begin to roll out, the coming months will be critical to getting climate change back on track, and global collaboration will be key to that,” said Silja Baller, Head of Analytics World Economic Forum. “The world economy is at a critical stage in growing divisions between and within countries. Great care will be needed to ensure that efforts to narrow discrepancies in one place do not exacerbate the situation elsewhere. ”

Recommended:
EU citizens who do not have a work visa in their passport are detained and expelled from the UK
JSC "Turboatom" was visited by representatives of CJSC "Novokramatorsk Machine Building Plant"
Ukrainian auto industry has increased the production of vehicles by eight times
On this topic
How can integrated subsoil use objects help the development of raw materials exports in Ukraine?
Prospects for ship repair in Ukraine
Yuzhmash told whether it is possible to launch reusable rockets from the Black Sea
How the reform of the electricity market in Ukraine can lead to a collapse and what to do about it
The Europeans are demonstrating record support for the single currency – the survey results
Gas as a weapon of Russia's hybrid war: how to deal with it?
Add a comment
Сomments (0)
News Analytics
Rescuers continue to search for 13 missing iron ore miners in North China12-06-2021, 15:39
European Union extends protective quotas on steel supplies for another three12-06-2021, 11:31
Metallurgical plants in the temporarily occupied territory of Donbass appointed12-06-2021, 10:59
JSC "Turboatom" was visited by representatives of CJSC "Novokramatorsk Machine12-06-2021, 10:43
One of the leading mining enterprises in Ukraine announced the blocking of work12-06-2021, 10:37
Vaccinations fuel demand for platinum - World Platinum Investment Council08-06-2021, 12:55
Sharp price growth continues in the rolled metal market - Ukrpromvneshexpertiza08-06-2021, 11:04
Analysts note overheating of the global scrap metal market01-06-2021, 13:28
Hydrogen-fueled steelmaking could be competitive after 2050 - McKinsey19-05-2021, 14:22
Steel raw material prices are skyrocketing across the board18-05-2021, 12:34
Sign in with: