The industrial storage unit installed in Vinnitsa is fully developed, designed and manufactured in Ukraine by the facilities of the KNESS group of engineering company investing in renewable energy. 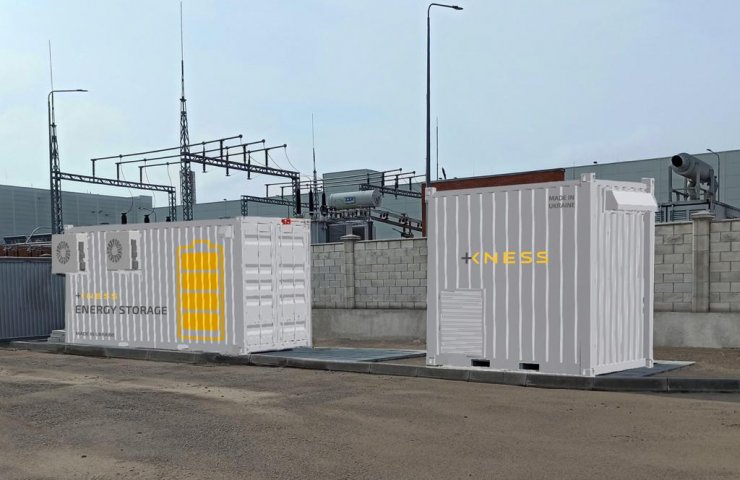 The first industrial energy storage system Energy Storage System, fully developed, designed and manufactured in Ukraine, has been tested in Vinnitsa. The capacity of the storage system will be 1 MW, and its capacity - 1 MW * h. The Mayor of Vinnitsa Sergey Morgunov, as well as the energy company KNESS, which is implementing this project, announced this on his Facebook page.

“Energy Storage System consists of battery clusters obtained as a result of the work of the KNESS RnD Center power electronics laboratory, which lasted for about a year. All intelligent systems of these modules are our own development. They perform the functions of balancing the charge of cells inside the modules, monitoring and managing all processes occurring within the cluster, ”comments Vladimir Golodyuk, head of the power electronics department of the KNESS RnD Center.

“Congratulations to the Ukrainian manufacturer on their own development of an energy storage system. This is an important component for balancing the power system, where the capacities of SPP and WPP are growing. This event once again proves that Ukraine is able to independently create its energy-independent future, developing green energy and the necessary electro-storage systems for this, ”commented Yuriy Shafarenko, Deputy Chairman of the State Energy Efficiency Agency, and stressed the need to adopt a legislative framework to attract investment in systems energy storage.

Recall that on July 12, an engineering company investing in renewable energy KNESS received permits for the construction of a research site for the production of" green "hydrogen in Vinnitsa, using the technology of its own development KNESS RnD Center. For the first time in Ukraine, the models of industrial production of green hydrogen for a wide range of applications will be practically tested at the KNESS hydrogen site. In particular, a new production technology will be used, different from electrolysis, adapted for integration with solar power plants.

Giant batteries are being built all over the world as compensators for surges in the production of "green" energy. As we already reported, Tesla Elon Musk began construction a large battery pack in Texas after the state experienced power supply problems following a blizzard in February this year.

In April, Rinat Akhmetov's DTEK completed the installation of the first in Ukraine industrial energy storage system (SNE) with a capacity of 1 MW and a capacity of 2.25 MW

At the beginning of June, the delegations of Ukraine and the World Bank held negotiations to attract $ 211 million of loans on concessional terms to implement a project to improve the stability of the Ukrainian energy system for integration into the European energy grid. Ukrhydroenergo developed the project /a> installation of industrial-scale energy storage systems at four of the company's hydroelectric power plants.

Финансовая аналитика, прогнозы цен на сталь, железную руду, уголь и другие сырьевые товары. More news and analytics on Metallurgprom telegram channel - subscribe to get up-to-date market information and price forecasts faster than others.
Сomments
Add a comment
Сomments (0)
On this topic
KNESS starts construction of a site for the production of "green" hydrogen in Vinnitsa
Buy Russian electricity for six Ukrainian companies
French Total took control of 6 Ukrainian solar power plants
Energy holding of Rinat Akhmetov wants to become a leader in the production of "green"
The global hydropower sector produced a record 4,370 TWh of electricity in 2020
How the reform of the electricity market in Ukraine can lead to a collapse and what to do about it
Recommended:
British Steel seeks financial support from the government to continue work
Prices for metal products in Ukraine increased by 26% last year
Ukraine arrested Russian metallurgical assets
News Analytics
Electric vehicles will play a key role in US aluminum production growth - Norsk01-02-2023, 12:17
The former president of Motor Sich was accused of aiding terrorists01-02-2023, 11:39
European stainless steel producers ready to raise prices31-01-2023, 16:16
World steel production in December 2022 collapsed by 10%31-01-2023, 14:36
Ukraine arrested Russian metallurgical assets31-01-2023, 10:13
European stainless steel producers ready to raise prices31-01-2023, 16:16
S&P: Russia will continue to dominate the steel export market in the Black05-01-2023, 11:22
Fitch Analysts Predict Big Drop in Global Steel Consumption This Year14-12-2022, 13:59
Analysts predict 5% annual growth in the iron casting market through 203006-12-2022, 12:44
Commodity prices will fall, metals quotes will rise slightly - Focus Economics28-11-2022, 13:28
Sign in with: