Miners block traffic in the city of Mirnohrad demanding wages

The demands of the protesters not only to pay off wage arrears, but also to improve the welfare of workers in general. 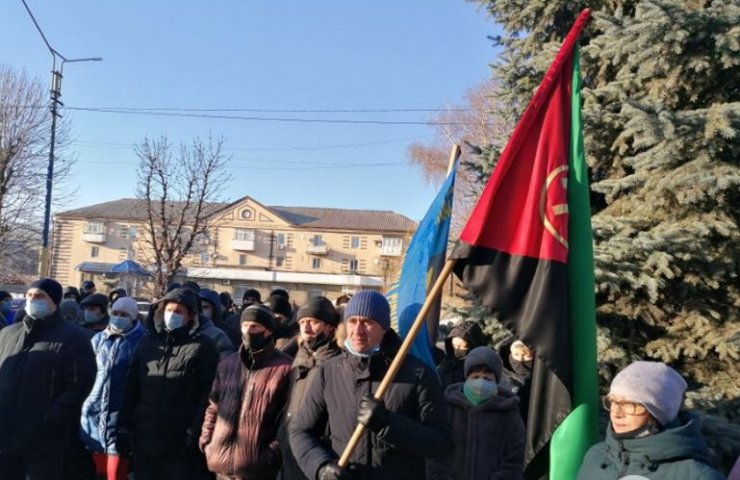 Chairman of the Confederation of Free Trade Unions of Ukraine Mikhail Volynets informs that on December 8 and 9 in Donbass - in Myrnograd (Dimitrov) and in Selidovo the protests of miners will continue.

The main demands of the workers are the payment of wage arrears (at "Selidovugol" it is 195 million hryvnia).

“Miners of the largest of the state mines -“ Capital ”SE“ Mirnogradugol ”refused to go down into the mine. A protest action began. Miners are moving towards the city center. From 9.00 a campaign will start - to block the road. The main demand of the miners is to pay off the current wage arrears and ensure stable remuneration for the miners of state-owned enterprises in the future, "Volynets said.

A new outbreak of workers' struggle for their rights in Ukraine began in September 2020 with a strike by miners of Kryvyi Rih, protests by KrAZ machine builders, workers in Sumy, Berdyansk, and Reni. Sometimes they managed to achieve success - paying off arrears or even raising salaries. But over time, wage arrears piled up again, and the purchasing power of the increased wages fell again.

The latest demands of workers in various industries are not so much about the payment of wage arrears, but about changes in the social, economic and political system of Ukraine.

The resolution of the miners of the State Enterprise "Mirnogradugol" - participants in today's protest action sets out the socio-political requirements for the President of Ukraine as the guarantor of the Constitution and for the Prime Minister of Ukraine as the head of the executive branch of government.

Among them are such as ensuring an adequate level of sanitary and living conditions during the winter heating season, stopping violations of workers' rights to assign pensions and receiving appropriate social benefits, preventing the closure of mines of the enterprise, etc.

Recommended:
JP Morgan Analysts Announce New Super Growth Cycle in Commodities
The situation with coal reserves in the warehouses of Ukrainian thermal power plants remains critical
Trade union committee "Azovstal" received an answer to the question about the increase in tariffs for gas and electricity
On this topic
1.4 billion hryvnia will be allocated to pay off wage arrears to miners
The Ministry of energy of Ukraine reported about the repayment of wage arrears to miners
Tomorrow in Kiev is expected protests by miners demanding to dismiss A. Gerus
Relentless degradation of the coal industry. Close Ukrainian mines?
In Luhansk region the miners refused to come to the surface
Miners go to Kiev to protest: will demand a billion hryvnia
Add a comment
Сomments (0)
News Analytics
Bosch launches automotive chip plant in Dresden08-03-2021, 13:45
Eurozone investor morale at its highest rise in 12 months08-03-2021, 12:30
Port on the coast of Pilbara in Australia stops shipments of iron ore due to08-03-2021, 11:14
Coronavirus drove Belgian skiers to the slopes of the Charleroi waste heap07-03-2021, 13:52
US Steel focuses on the production of nanosteel for high-strength alloys07-03-2021, 13:46
Spread between raw materials and high strength alloy steel in Europe increased01-03-2021, 20:21
Increase in prices is forecasted in the markets of steel raw materials -26-02-2021, 09:25
Troy ounce of gold will drop $ 500 in two years - Fitch25-02-2021, 18:29
Global iron ore production growth to outstrip cumulative production in India23-02-2021, 10:22
Fitch Ratings Warns of “Shocking Impact” on Fossil Fuel Exporters18-02-2021, 14:44
Sign in with: